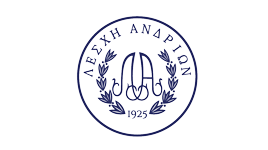 The Andrion Club is one of the oldest associations on Andros and one of the longest-lived and most progressive social clubs in Greece. It was established since its foundation as mixed, for men and women, in 1925  in Chora – Andros. It reflected the flourishing andrian society that brought it into being and engaged in a wide range of social and cultural activities and acts as the administrator of the “Fokion I. Kalogeras” Bequest, which provides scholarships for young people coming from Andros.

In antiquity, the term ‘λέσχη’ (leschi) denoted the place where people gathered for discussion (from the verb ‘λέγω’ [to speak] in the sense of ‘συλλέγω’ [to assemble]). According to Chapter A, Article 1 of the Founding Charter of the Andrion Club, which received official approval in 1925, in accordance with Law 281 / 1920 “On Associations”, and which would remain unchanged in the 1972 amendment, the Club exists: “To strengthen and develop the social relations between its members, through discussions and recreational activities engaged in by members at the Club, through the bringing together of newspapers and periodicals and the setting up of a library, through billiards, chess and other similar games, through dances and through literary and cultural soirées”.

From March 2012, the Andrion Club, is housed in the rooms of the EOXA building, in Chora – Andros. In August 2018, the reins of the administration were taken over by its younger members, descendants of founding and historical members. Since then a strategy for its revival commenced, with steady commitment on its founding principles for the enhancement of the social cohesion, the strengthening of the education and the cultivation of civil society in Andros.

The website of Andrion Club
is a donation in the memory of
Captain Ioannis D. Falaggas “Soustouris” (1908 – 1999)
from the married couple Mr. Leandros Kontogouris and Mrs. Lygeri Hatzi in 2020.